A Guide to the Lunar Festival 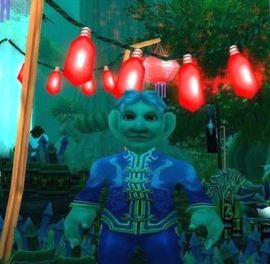 This post is more of a “Guide to Guides” to the Lunar Festival.

Starting on Jan 22 of this year and running through Feb 12, the Lunar Festival celebrates the defeat of the Burning Legion, thousands of years ago. It is also a time of rememberance for the wisdom and valor of that ancient time. Adventurers of both factions will seek out and offer their respects to the Ancestors of Azeroth. In addition, the ancient demi-god Omen stirs during the Festival and you will be called to put him down. (The pic is from Joystiq)

New Elders have been introduced with Cataclysm, meaning there are now 84 Elders to honor. Honoring Elders awards a Coin of Ancestry and coins can be redeemed for various items, including pets.

Blizzard says this, via MMO-CHampion:

“Every year the druids of Moonglade hold a celebration of their city’s great triumph over an ancient evil. During the Lunar Festival, citizens of Azeroth have the opportunity to honor their elders by celebrating their sage wisdom, sharing in magnificent feasts, and of course…shooting fireworks!”

The Lunar Festival returns to Azeroth in a cascade of pyrotechnics on Sunday, January 22! With the start of a new year, elders of generations past manifest around the world to impart their wisdom upon all who would listen. Should you encounter these venerable spirits in your travels and take the time to heed their wisdom, they may even pass along tokens of their gratitude — Coins of Ancestry, the lessons of a past age in physical form. Gather enough of these Coins of Ancestry and the Cenarion Circle will open to you their stores of celebratory fireworks, trinkets, garbs, and recipes!

The Cenarion Circle have even more cause to celebrate this year than any previous, for this year also marks the first Lunar Festival since the return of many Ancients that had fallen in battles past: Goldrinn, Malorne, Aviana, and Cenarius himself. But this celebration is muted by the eternal torment of one of their own — Omen, blessed by the moon goddess Elune, has risen again from the depths of Moonglade’s lake. Driven mad by the Burning Legion’s tainted magics during the War of the Ancients, Elune’s blessing of immortality means that he will forever be cursed to return in his maddened state at the advent of a new year. Heroes are called to help ease this tormented Ancient’s suffering, in the hopes that perhaps next year will see him return with a clearer mind.

WoWwiki says this about the Festival:

The Lunar Festival is a time of celebration. The people of Azeroth celebrate their triumph of many thousands of years ago, when an alliance of good races (the night elves, tauren, furbolgs, and earthen) defeated a terrible evil called the Burning Legion. It is also a time of remembrance for the valor and wisdom of that ancient age.

Today, the Lunar Festival is held by the druids of Nighthaven. Both the Horde and Alliance are welcome to celebrate and shoot fireworks — a symbol of Elune’s power. Ancient heroes of the past also appear throughout the land, offering gifts to those who find and honor them.

It is a time of happiness, fortune and celebration, but it has a deeper motive as well.

Omen, defeated so many centuries ago, yet remains in Lake Elune’ara. Although driven insane by the Burning Legion, the demigod still possesses Elune’s blessing and thus is immortal. During the Lunar Festival, he stirs…and heroes of the land are called to defeat him once again.

Decorations are placed in every capital as well as in the regions of Nighthaven and Moonglade. Revelers celebrating the Lunar New Year will be spread throughout the world (the revelers are concentrated in Moonglade, except for those that show up for the fireworks shows in Stormwind/Thunder Bluff/Booty Bay); the lunar festival specific NPCs can be found in each capital and in Moonglade. There are also other NPCs — spread throughout the world — that are ghost-like elders who players must find and honor, as noted below.

Lunar Festival events focus on the celebration of the ancestors of the inhabitants of Azeroth. Quests can be found throughout the world offering holiday-related items such as fireworks and other memorabilia to celebrate one’s elders and ancestors. Elder Ghosts are found throughout the world of Azeroth and each time players finds a new Elder, they receive a token that can be redeemed for special holiday-related items.

Click here for the Wiki page for the Lunar Festival – it includes quest, events, items, and more.
Here’s Wiki’s list of Elders

WoWhead News has a pretty complete guide to the Festival.

The Lunar Festival is held every year starting on a date that typically coincides with the Chinese New Year. 2012’s Lunar Festival starts on January 22 at 2:00 AM and ends on February 12 at 2:00 AM. Ancestors of Azeroth are praised and honored by both Horde and Alliance, who then reward players with a special title, Elder <Name>, a celebration in Moonglade, and numerous Coins of Ancestry that can be used to purchase festive garb, patterns and fireworks!

There aren’t too many changes this year, but there are a few notable ones:

Ashelia and I will be updating the guide again when the holiday goes live–map coordinates for the new elders, screenshots of the event, and any other changes we find.

WoW Insider has an Achievements Guide:

The Lunar Festival is one of WoW’s more fun and forgiving holidays, and this year it runs from Sunday, Jan. 22 until Sunday, Feb. 12. That’s right, folks; you’ve got three weeks to get everything done, which is definitely a good thing if you’re new to the holiday and unfamiliar with the amount of travel time it requires. The basics of the holiday involve talking to a number of elders to honor them, receiving Coins of Ancestry in return, and then using the coins to purchase holiday items. The To Honor One’s Elders meta-achievement is also a requirement for What A Long, Strange Trip It’s Been, so if you’re still after a Violet Proto-Drake, make sure you get this done.

The Lunar Festival is definitely not one of Azeroth’s more difficult holidays, but it’s time-consuming if you’re starting from scratch due to the number of NPCs you’ll need to hunt down. However, it’s also a good time to do World Explorer and Surveying the Damage for just that reason.

Now get out there and show some respect!