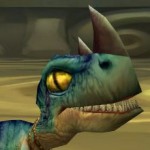 In the new World of Warcraft expansion Mists of Pandaria, not only will you be able to play as the awesome new Pandaren, but you will also be able to catch and train your very own vanity pets! You will be able to train your pets by practicing with your friends and teaching them new unique abilities and attacks. From what I saw, it seems like you build your team of 3 pets and have battles against other players. If your current roster of pets is lacking, then you can wander the world looking for some better pets. If you spot one you’d like to catch all you have to do is beat it up with your current pet and capture it. These wild pets you catch will have somewhat random stats, but you will have a small chance to catch one with exceptional stats.

Lashtail Hatchling, I choose you!

There are special pet trainers you can go to, who will be able to teach your pets new tricks and abilities. However, the trainers will challenge you to a battle sometimes.

It does seem a lot like Pokemon, but Pokemon was and is still really popular with millions of people. I used to love Pokemon when I was a kid and I think this sounds like it could be fun if done right. So, I’m really looking forward to this part of Mists of Pandaria (MoP.) The Kung-fu Pandas… well, not so much.