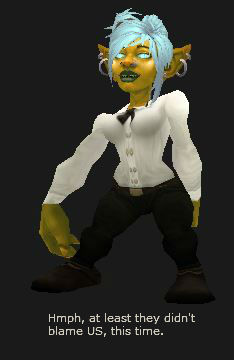 This popped up on Yahoo News a few days ago.

The issue came to light on June 22, when a user named “Abidah” realized that almost 200,000 gold pieces had disappeared from his account for three unauthorized purchases in the game’s Auction House,. He posted his plight on the Blizzard forums, where other users shared similar experiences.

Blizzard investigated, and discovered that while “World of Warcraft” itself had not been compromised, its Web and mobile Auction House apps had. On June 23, Blizzard acknowledged the hack.

“We have taken the Web and Mobile Auction House offline to perform an emergency maintenance,” wrote a customer service representative on the forums. “Unfortunately we can’t provide an ETA as to when they will be brought back online.”

The article makes a good point, that isn’t so obvious. They hackers steal the gold, generally to sell, and the Bliz restores the gold to the hacked account (usually.) Assuming the naughty accounts, and their gold, aren’t deleted, then that gold amount was effectively doubled. This will tend to push inflation.

Now, if the “WoW Hackers Steal Millions in Gold” headline is actually true (as opposed to stealing a lesser amount,) then there might be a real problem here. Blizzard thinks there is, and here’s their announcement. I know people who have had account hacked, though
not for this scam, so I agree that some revisions are needed.

This story is inline with something I posted on the Facebook page earlier this month, on account security. That link will show you how to generate a strong password.