As almost everyone knows by now the World of Warcraft: Warlords of Draenor expansion (unknown release data) will, among other things, raise the level cap from 90 to 100. With lots of new quests, new stories, new NPCs, new dungeons, and so on leveling from 90 to 100 should be a fun experience, at least the first few times. 😉 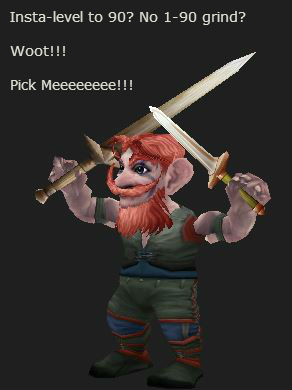 All level-90 players will begin in the Tanaan Jungle, and for newly boosted level-90 characters, the experience will be tailored to help you get up to speed and ready for taking on the challenges to come. Instead of gaining all of your skills and abilities right away, you’ll be able to unlock them as you progress and learn your way around your more powerful character—and you’ll need every ounce of your ability to stop the Iron Horde and continue your campaign on Draenor.

Once the threat at the Dark Portal has been (temporarily) dealt with, Alliance and Horde players will take divergent paths. Each will answer the call of their new allies to engage the native threats of the world and mount a long-term defense against the Iron Horde.

One common piece of feedback we’ve received from new players and those who’ve taken an extended break from the game is that World of Warcraft requires a significant time investment before they’re able to “catch up” and play with high-level friends. Design changes such as speeding up the leveling curve and features like the popular Scroll of Resurrection and Recruit-a-Friend system have proven very popular, but the issues’s only getting more challenging with each patch and expansion we release. By giving players the option to boost a character to be ready for the latest expansion content, we hope to remove some of these entry barriers and make it so anyone can pick up and enjoy Warlords of Draenor right away, no matter how much World of Warcraft they’ve played in the past.

From WowHead, on their “What We Know about WoD so Far” page

Want to play someone new? You’ll be able to get one character insta-leveled to 90, even if you don’t already have one, and you can’t enter the new zones with that character. There might be an option to pay real money for additional levelings, but that remains to be seen. And let’s face it, even with something like Zygor the 1-90 trek will take awhile. So I think this insta-level thing will be pretty popular.

They cover some of the issues and concerns with leveling from 90 to 100. As for new abilities, they’re looking at upgrading a core ability. Some of the upgraded abilities will probably be along the lines of the old “spell ranks” and many will be passive. While a new level increases your power anyway they’re thinking of giving an ability a significant upgade. He mentioned 20% to Execute as an example. At about 2:00 in the video he lists some other example awards that they’re thinking about. Of course, none of these are set in stone.

The thread covers the high points of the expansion and has a few hundred comments to check out. Some will be QQ, but there are some good ones in there. Also on Reddit is our link on the level 100 talents pointing to our post here.

And now you know about as much as anyone else (other than the Dev, who are all locked into secret bunkers, deep underground.) 😉